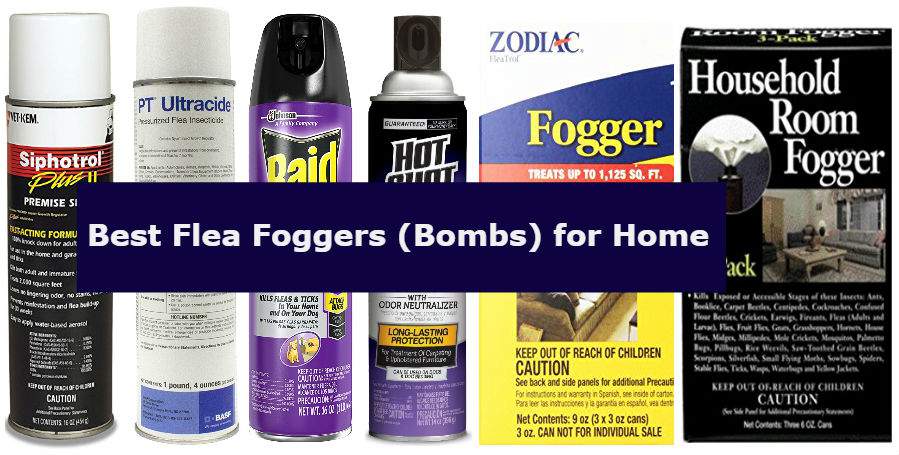 It is never an easy task to find the best flea fogger for home to get rid of fleas completely and hence you will find that these hard to kill parasites keep coming back.

The problem is that they not only feed on the blood of their hosts, which could be your dog or cat but their existence results in continuous scratching leading to rashes.

Among the various fleas, the dog flea is considered the most dangerous as they are responsible for spreading a type of flea tapeworm known as Dipylidium caninum.

In order to tackle the problem of fleas and to get rid of flea infestation in the home, there is a wide variety of home flea foggers available.

What is the best flea fogger?

When it comes to deal with fleas in the house, there are variety of flea bombs available which makes it very confusing to choose the best flea fogger for your house.

No Worries! We have created a list of 5 best flea foggers and bombs for your house that you can use so that you don’t have to work too hard to find the right ones.

Let’s take a look at the different types of flea foggers available for home.

Siphotrol plus fogger by Vet-Kem offers flea treatment for both dogs and cats.

The active ingredient includes Permethrin and (S)-Methoprene are highly effective in getting rid if fleas and ticks.

Permethrin is a synthetic chemical that belongs to the family of pyrethroids and it ats as a neurotoxin for adult fleas.

Methoprene, on the other hand, is an insect growth regulator (IGR) that affects the growth of larvae and ensures they don't reach the adult stage.

Note: It is important to vacuum your home or pet area prior to using the fogger.

The Zodiac FleaTrol fogger is one of the best flea fogger for the house when you are looking out there for treating large-scale flea infestations.

It is a dual-action fogger, which means it consists of two different ingredients - one is a highly powerful insecticide (Permethrin) and the other is an effective Insect Growth Regulator ((S)-Methoprene).

Permethrin will kill any and all fleas and ticks upon contact while the IGR will attack the eggs and larvae and hinder their life cycle.

The Zodiac FleaTrol room fogger does not leave any bad odors or ticky mess. The Bonide household room fogger is a highly effective product that can kill both flying and crawling or wingless insects.

It is a triple action insecticide flea fogger as it contains three different active ingredients, which are Tetramethrin, Permethrin, and Piperonyl Butoxide.

All three ingredients are synthetic insecticides belonging to the family of pyrethroid and are effective in killing adult fleas.

The Bonide Chemical Co room fogger is available in a pack of 3 cans. It is considered to be the best flea fogger for especially when applied the room, it seeks out fleas and bugs where they hide and kills them on

The beauty of the product is it kills the hidden bugs and doesn't leave any stains as it is a water-based fogger.

The Ultracide professional flea and tick control fogger spray has been developed specifically for indoor treatment of flea infestations.

It is a highly effective flea and tick control product as it contains 3 different active ingredients and they are Permethrin, Phenothrin, and Pyripoxyfen.

Permethrin and Phenothrin are chemical insecticides that are effective in killing adult fleas while Pyripoxyfen is an insect growth regulator (IGR) that kills the larvae and thus prevents re-infestation. As the name suggests, this is really a "no mess" fogger that kills fleas right there and then - on contact!

It comes with an odor neutralizer and deep-reaching formula that creates a fine and dry fog, which can penetrate into crevices, cracks, under carpets, and just about anywhere in your home.

The active ingredients of the No Mess fogger include Tetramethrin, Cypermethrin , and Piperonyl butoxide.

These are pesticides belonging to the family of pyrethroids and pyrethrins and are highly effective in dealing with fleas as well as several other household pests.

The Hot Shot No Mess Fogger comes in a pack of 3 canisters of 1.2-ounce. Raid flea fogger is a water based fogger that Contains pyrethrins and methoprenes active ingredients to kills the fleas and hatch eggs.

It Fights flea infestations inside the house and Lasts up to 4 months to provide flea protection to your home.

Raid flea fogger is indeed one of the best flea killer that has non-staining formula and attacks fleas to provide maximum protection to get rid of fleas from the home fast. Besides flea, it also kills bed bugs and various other pest and thus controls bugs from entering your home again

All About Flea Bombs or Foggers

Fleas are all throughout unwanted creatures that attack our homes inevitably. You definitely not want this to happen in your areas, so you will do all the ways and means you think it will make them vanished away.

Flea foggers or bombs are the most sought option to control fleas. with many kinds of flea bombs are being offered in the market it is really tough to find the best flea fogger.

Also the please be noted that most flea fogger works on more than one kind of pests like tick, roaches where you must ready carefully when buying a flea fogger for home to eiminate fleas permanently.

In fact, flea bombs are the best options and proven to work highly efficient. But beware that they contain chemicals that are possibly dangerous to your health.

Things You Should Know About Flea Bombs

Since they contain toxic substances, flea bombs can kill fleas, but they should be applied when the flea population reaches the worst level to prevent your family and pets being exposed to toxic substances. You should also know that flea bombs:

How to Use Flea Bombs?

Make sure that no one is inside your house except you, when you apply flea bombs.

Enter your house after at least 8 hours or depending on the instruction given on the flea fogger canister you used. You should follow strictly the time, otherwise, you are exposing and risking yourself with the chemical residues left behind.

When decide you flea foggers to kill and get rid of fleas you will have to prepare your house for fogging. The below tips will be helps when you are going for fogging the house.

Both flea fogger and spray has the same level of effectiveness. However, they differ in terms of their effect’s duration. Most fogging products contain pesticides that are fast acting but do not last long. Spray products, on the other hand, give you a longer lasting residual effect.

Yes, flea bombs can kill fleas, but not permanently. A significant effect also depends on the brand of fogger you used

No, Lysol absolutely would not kill flea since this is an antiseptic solution purposely to kill germs, bacteria, viruses and other potential microorganisms

Can Flea Bomb Make You Sick?

Yes, if you use the flea bomb without following all the instructions given and since this solution contains unwanted chemicals then it possibly not good for both human and pets’ health.

A flea bomb, which is alternately called as a flea fogger is widely used to control fleas in homes and work areas. While it helps eliminate fleas though not, in the long run, flea bomb can still be used with extra care or better not to use it since it can harm the health of your family and pets.

Please be noted that the below alternates are for those who don't have to use flea bombs and to get rid of fleas naturally. These alternate definitely work but they are less effective in getting rid of fleas from your house when compared to flea fogger or flea sprays. Also most flea foggers comes with insect growth regulators.

Garlic: It is an effective natural poison to fleas, but mixing it with your cat foods is not recommended.

Salt: It can help eliminate fleas in your house. Fleas cannot survive in a salty environment.

Salt and Borax Mixture: Sprinkle this recipe on the passage areas of the fleas to dehydrate and kill them eventually.

Baking Soda: Aside from being an effective clearing agent, it can also cause dehydration of fleas and kill most of this pest stages from eggs to pupae. Make a solution and spray it on carpets and mattresses.

Insecticide and Insect Growth Regulator (IGR): These will boost the deadly effect of those natural remedies applied on fleas. They contain chemicals, but with less effect on your health. In fact, salt function as a natural source of IGR.

In addition, wash tough wood floors, all beddings and clean inner parts of couches. Most of the larvae of fleas inhabit the carpets so extract them out using a vacuum.

Foggers are one of the best ways of dealing with medium to large scale flea infestations and they are primarily created for indoor effectiveness.

They can be used in garage space, attics, and any part of the home to get rid of fleas, ticks, and other pests. Most foggers can kill multiple species of pests or insects while some are specialists in getting rid of larvae and eggs as well.

If you are planning to pick up a flea fogger for your home then it always helps if you identify your requirement in terms of type of insecticide and infestation.

8 Natural Ways to get rid of fleas on dogs, cats and in the house

15 Plants that repel fleas and insects naturally (Safe for pets)